The Wordnet synonym database can be churned into a Lucene Index. This allows for rapid synonym lookup. User query terms can be expanded using these synonym sets as a method of boosting recall.  Query expansion is a known technique for improving retrieval performance in Information Extraction systems. 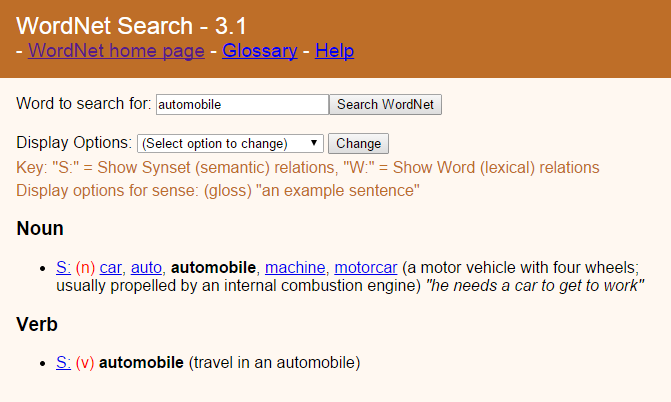 This article covers the building and querying of a Lucene search index of Wordnet synonyms for the purpose of enabling computationally-efficient and thread-safe synonym lookups at runtime.


To build the index, you can either call Syns2Index directly from the command line or in the context of another Java class.

I prefer to use a simple wrapper:


The referenced "pl" file is the Wordnet Prolog Distribution (see references below).

Note: Imports have been removed for increased readibility.


LUKE is a handy development and diagnostic tool.

LUKE can be used to access pre-existing Lucene indexes and for the purpose of displaying and modify content.

I've connected LUKE to the Wordnet index, and can perform graphical queries: 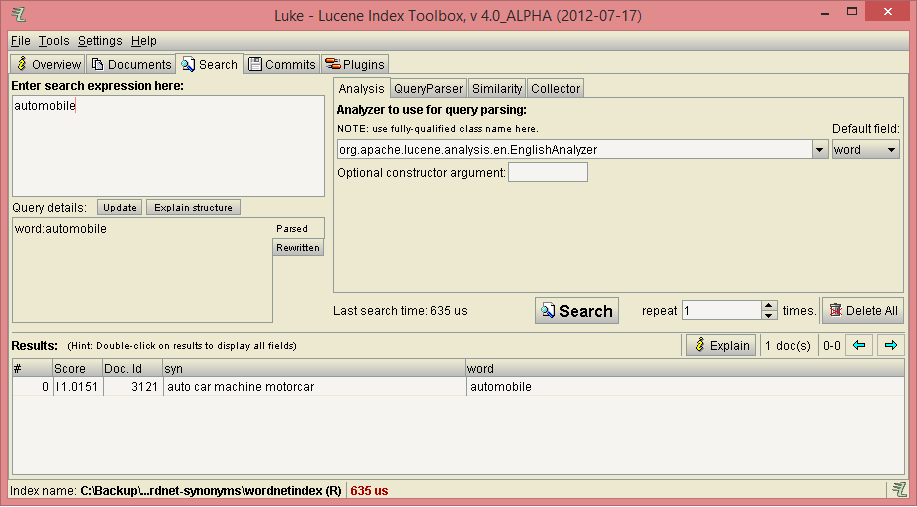 
We note that the test case output is identical the screenshot captured from the online synonym lookup on the official Wordnet site.


I use Maven, and my POM looks something like this:

Posted by Craig Trim at 9:05 AM No comments:

Posted by Craig Trim at 2:53 PM No comments:


Source documents can either be loaded into Lucene on a nearly as-is basis, or be passed through a custom parser.  Such a parser may be responsible for various forms of pre-processing on the source document and/or removing information that should not be placed within the index.

The output of the parser is a collection of Lucene documents, that are then loaded into the Lucene Index, and made available to be queried.


At a minimum, a Lucene developer will need to create a component that returns one or more Lucene Document given one or more incoming source documents.

The component may leverage existing technology (such as Apache Tika) for transforming incoming document types (PDF, DOC, etc) into plain text representations.  Or, the component may require custom logic for extracting information.

The developer will also need a strategy for reducing the incoming document in a set of Key/Value pairs.  This could be as simple as treating the entire document as a single unit (e.g. key=all, value=<everything>).  It's more likely that multiple Key/Value pairs will be used, including special treatment of document metadata, as a method for enhancing search and the display of search results.


The Lucene API is easy to use and easy to understand. Creating a basic search index up and running is not difficult. Complexity is found in loading and tuning the index and manipulation of the underlying content -- this is both a science and an art form.

Hence, the API is a simple, structured hierarchy of Key/Value pairs extracted from incoming source documents.

For the sake of this tutorial, we'll assume that each source document will have a corresponding Lucene doucment.  There might be times when this isn't true.  A document could have a single Key/Value pair.  This generally happens when structured data is being loaded into a Lucene index.  The contents of a customer table could be represented using a single document for each customer name.

We'll make the assumption we're dealing with unstructured text, and that for each source document we will create a Lucene document that contains multiple fields, and each field contains a single Key/Value pair.  We'll have to carefully choose the proper type of field to represent our Key/Value entry, depending on how we plan to use that data in our search queries.

Assuming the code to create the Lucene documents already exists, the latter half of the process depicted in Fig 1 looks like this:


The only question that needs to be answered at this point is how to create Lucene Document instances from unstructured source data.


In Lucene, a Document is the unit of search and index. An index consists of one or more Documents. Indexing involves adding Documents to an IndexWriter, and searching involves retrieving Documents from an index via an IndexSearcher.

A Lucene Document doesn't necessarily have a 1..1 corespondence with an incoming text document, nor does it even imply the need to be something similar. If Lucene is being used to index structured text (e.g. a database table of users), then each user would be represented in the index as a Lucene Document.

A Document consists of one or more Fields. A Field is simply a name-value pair. For example, a Field commonly found in applications is title. In the case of a title Field, the field name is title and the value is the title of that content item. Indexing in Lucene thus involves creating Documents comprising of one or more Fields, and adding these Documents to an IndexWriter.

Given a hypothetical source document, these are some Key/Value pairs I would be interested in:

The implementation of these methods is not important.  This is a hypothetical source document, and therefore this data is hypothetical.  There is no implication here that every incoming document will have any or all of these content items (id, title, page, url, etc).


Each of these Key/Value pairs will be contained within a Lucene Field.  The type of Lucene Field I choose is important, and will impact how the data can be found during the execution of a Search Query.

To get a sense of other fields that could be added to a Lucene Document, I recommend looking at various Ontologies that have been created and used in the industry in the last few years.  Dublin Core is a small set of standard vocabulary terms that can be used to describe web resources.  The W3C PROV Ontology is an interoptable vocabulary for defining the influence on digital entities by agents, activities or other entities.

Proper use of known taxonomies and ontologies can provide a standards-based way of extending your Lucene search index and encourage lateral thinking in terms of what data is extracted from the incoming source documents.


There are two basic Field types:

I'm going to implement the above fields like this:


The VectorTextField is a custom type that logically extends the Text Field functionality. This field type stores additional information and permits retrieval of row vector information during the query result stage.

The attribution is given inline within the source code below:


I use Maven, and prefer to create a single POM for Lucene, then reference this POM in other projects.


Then in other projects, I simply reference this as: